Tekashi 6ix9ine Calls Himself the ‘King of New York’ as He Announces Return to Music, Social Media

Tekashi 6ix9ine Calls Himself the ‘King of New York’ as He Announces Return to Music, Social Media

Tekashi 6ix9ine may not have announced his social media break, but he’s making his return loud and clear.

He took to Instagram on Friday, April 8, to hail himself as the “king of New York” and let his 21.5 million followers know that he’s ready to “take over again.” Tekashi 6ix9ine said, 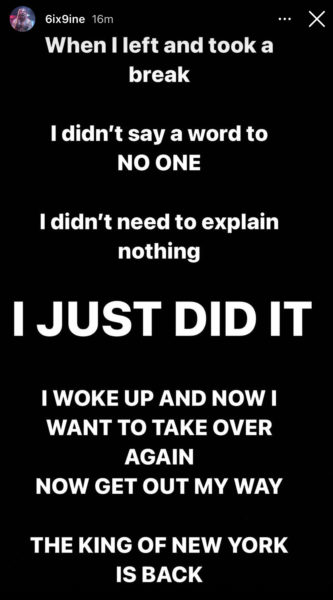 He also shared a post to his page announcing his upcoming album, which is set to be released April 15. In his caption, he said,

“I hope everybody enjoyed there 15 minutes. THE DEMON IS BACK APRIL 15TH. I’m THE BEAST they couldn’t contain. The industry most hated animal. APRIL 15th the KING OF NEW YORK IS COMING BACK. I’m going back home ??? …… ?????? AYOOOOOOO GINÈ GINÈ ?? DONT GET CAUGHT ON REPLAY ????”

Tekashi 6ix9ine is known for his antics in the media, constantly facing lawsuits, getting into heated exchanges and trolling other rappers, including Nipsey Hussle and Lil’ Durk. The “GOOBA” rapper has also been labeled a snitch by others in the industry after pleading guilty to various counts of racketeering, conspiracy, firearms violations and narcotics trafficking charges in 2019. He took the stand and testified against his fellow gang associates to avoid was facing 47 years in prison. 6ix9ine said,

So who broke it first? I get it don’t fight fire with fire, I’m sorry but what did I do wrong? Be loyal to n***as that was f****ng my baby moms? Be loyal to n***as that kidnapped me? Beat the s**t out of me on video and everything? I’m supposed to be loyal to that? You know what it is, ya don’t want to accept the fact that those is all true facts. Ya understand why I snitched, ya don’t wanna understand. Ya don’t wanna understand that d*mn this kid, he moved their families out of poverty. He paid for schools for all of the members whatever. But he snitched on them why? Were they loyal to me? When I met son he was sleeping on a rug.”

While he is seemingly the most hated, he is equally just as popular—depending on who you ask, of course.

Are you looking forward to new music from 6ix9ine? Let us know in the comments!