DEVIN Booker scored 32 points and made six 3-pointers in three quarters on Tuesday night to help Phoenix post a 121-110 victory over visiting Los Angeles, a triumph that eliminated the Lakers from the play-in berth race as well as providing the Suns with a franchise-record 63rd victory.

LeBron James sat out with an ankle injury for the fifth time in seven games as Los Angeles (31-48) lost its seventh straight game. The setback stomped out the Lakers’ final hope after the San Antonio Spurs defeated the Denver Nuggets earlier in the night. 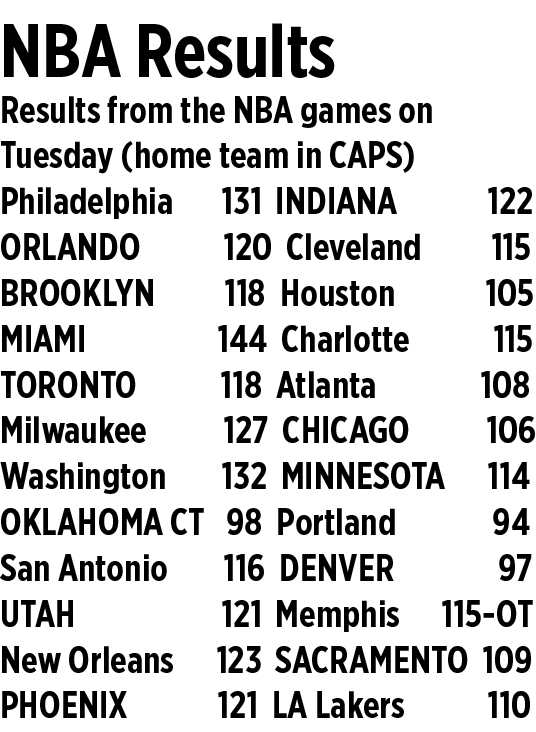 Russell Westbrook scored 28 points and Anthony Davis registered 21 points and 13 rebounds for Los Angeles, which dropped to 11-28 on the road. Phoenix is an National Basketball Association (NBA)-best 32-8 at home.

Cameron Johnson had 12 points and Mikal Bridges added 10 for Phoenix, which shot 49% from the field and was 14 of 39 from 3-point range. Cameron Payne contributed 11 assists for the Suns, who went 4-0 against the Lakers this season.

Austin Reaves tallied 18 points and Carmelo Anthony and Dwight Howard added 10 points apiece for Los Angeles, which shot 45.3% and was 9 of 29 from behind the arc.

The Suns led 63-58 at half time before dominating the first 9:23 of the third quarter. Crowder and Booker drained 3-pointers during a 12-0 burst to give Phoenix an 84-65 lead. The advantage reached 20 when Booker connected on another trey to make it 87-67 with 5:30 left in the period.

Ayton finished off the quarter-opening 33-12 burst with a turnaround jumper to boost the margin to 96-70 with 2:37 to go.

Booker completed a 16-point third quarter with a layup with 9.1 seconds left as Phoenix took a 98-80 lead into the final quarter.

The Suns led by 25 midway through the final stanza before Los Angeles scored 12 in a row to cut into the margin.

Booker scored 16 first-half points as the Suns held the five-point lead at the break. Westbrook had 18 in the half for the Lakers. — Reuters