Kathy Hilton will be seen enduring some intense drama with sister Kyle Richards on the upcoming 12th season of The Real Housewives of Beverly Hills. But over the weekend, it was her relationship with sister Kim Richards that took center stage.

Following the release of the season 12 trailer, which featured Kyle breaking down over things Kathy had allegedly said about her, a report surfaced on Instagram in which it was revealed that Kathy was not currently following Kim, who was upset about a phone ban at Paris Hilton‘s wedding last year, on Instagram.

“[Kathy Hilton] no longer follows [Kim Richards] on Instagram while Kim still follows her,” All About the Real Housewives revealed to their followers on Instagram on April 9. 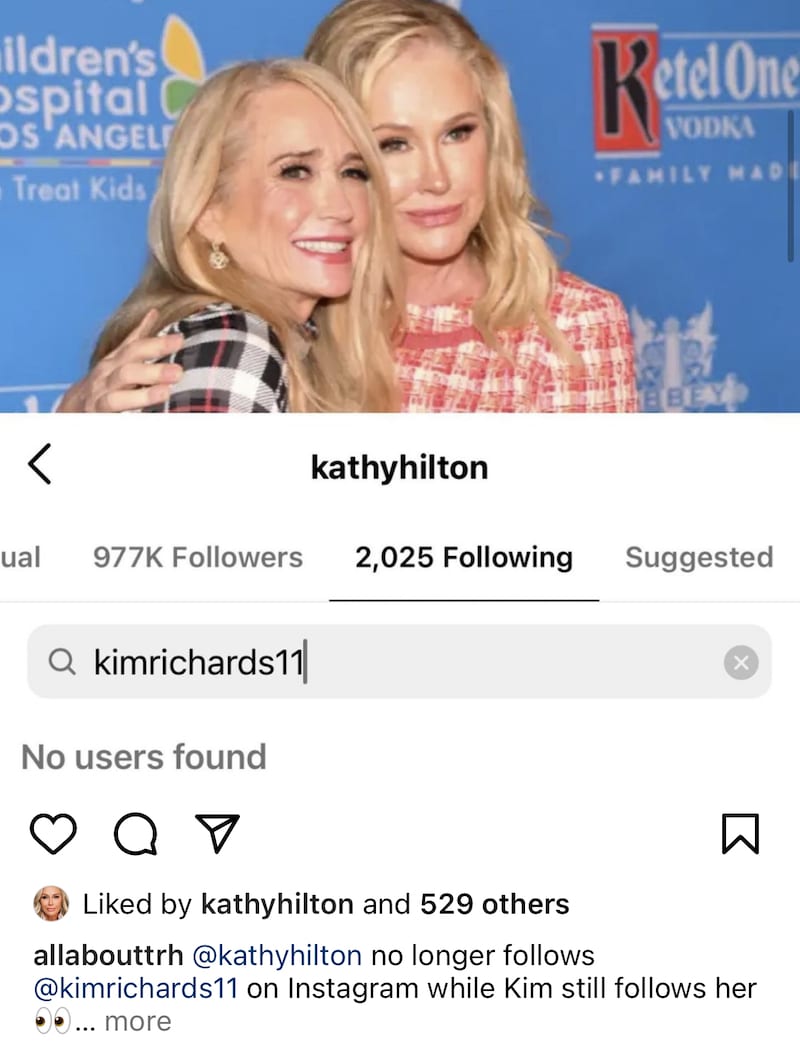 Following the post, Kathy was alerted and quickly admitted it was true that she was not following her sister.

“Thank you for the heads up you were right I just refollowed,” she wrote in a comment sent to the outlet.

Kathy then confirmed that things between her and her sister are all good, saying that they speak to one another “all the time” and even exchange funny DMs on Instagram.

“I speak to Kim all the time. Thank you for letting me know about the Instagram I will follow again. We all send each other DMs about funny memes???” she shared in a second comment.

Earlier this year, amid filming on the 12th season of RHOBH, rumors of potential troubles between Kathy and her sisters began swirling after it was revealed that both Kim and Kyle had been absent from Kathy’s birthday celebration.

A short time later, it was Kathy who was reportedly absent as her sisters spent time with her daughter, Nicky Hilton, and Kyle’s daughter, Farrah Aldjufrie.

More recently, earlier this month, Kyle appeared on Melissa Gorga’s On Display podcast, where she opened up about the challenges of working with her sisters on the Bravo reality show.

“You know them too well… They know you too well,” she explained, noting that her infamous limo spat with Kim on season one was “the most stressful time ever for me in the show.”

As for her time with Kathy on the show, Kyle admitted that Kathy “was just not used” to the show’s dynamics at first.

The Real Housewives of Beverly Hills season 12 premieres Wednesday, May 11, at 8/7c on Bravo.