Erika Jayne on ‘Dragging Haters’ on RHOBH, Reacts to Critic

Erika Jayne is ready for the start of The Real Housewives of Beverly Hills season 12.

As fans remain waiting on the edge of their seats for the first look trailer for the “dramatic” new season, Erika took to her Twitter page, where she teased what fans can expect to see from her and her castmates — and clapped back at a critic who accused her of having “a lot of nerve” amid her ongoing legal drama.

“Ready for the new season?? I know I am!” Erika tweeted on April 6.

After returning to Twitter for the first time (aside from a February retweet) since December of last year, Erika responded to a number of messages from her fans and followers.

“We can’t wait for you to drag fragile legs left right and center,” one person wrote.

“You ready to work? You ‘bout to be busy….” Erika responded, confirming drama with her castmates.

“Are we going to be dragging more haters this season queen?” another fan asked.

Following Erika’s response to the fan who labeled her a queen, Erika was forced to defend herself against someone who reminded her that “the Queen lives in England in Buckingham Castle.”

“[I’m] an AMERICAN ‘Queen’ that lives in LA. It’s not that serious,” Erika replied, confirming she too believes she’s a “queen.”

As Erika continued to be flooded with tweets from both excited fans, who were looking forward to seeing Erika’s return to RHOBH, and harsh critics, the reality star was met with someone who told her, “You got a lot of nerve.”

But Erika didn’t take the comment to heart. Instead, she seemed completely unconcerned with the opinion of her hater, and she asked, “And?” 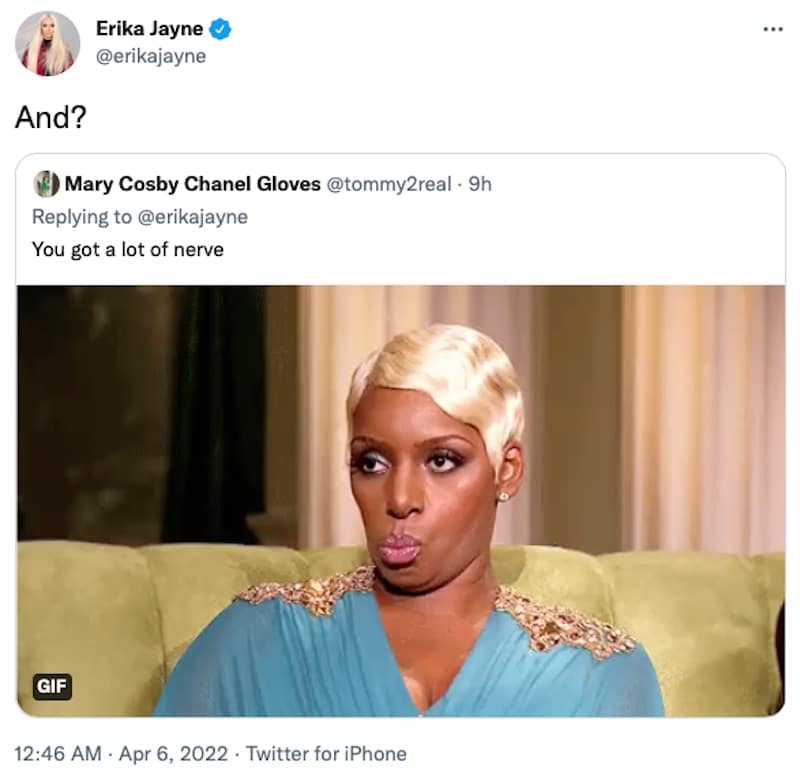 While fans will have to wait and see who Erika drags amid the new season, a report last month suggested she made a shocking allegation against Kathy Hilton during their girls’ trip to Aspen.

“Erika Jayne [and] Kathy Hilton are not on speaking terms after Erika Jayne revealed a stunning allegation against Kathy Hilton in the fallout of their cast trip to Aspen, Colorado,” Real Housewives News revealed on Instagram on March 21. “Erika alleges that Kathy made a harsh slur against an employee off-camera.”

“Kathy never faced Erika after she made the accusation and ceased filming with the group afterwards,” the outlet added.

The Real Housewives of Beverly Hills season 12 is expected to begin airing on Bravo later this spring.